Tales from the Library, Part 2 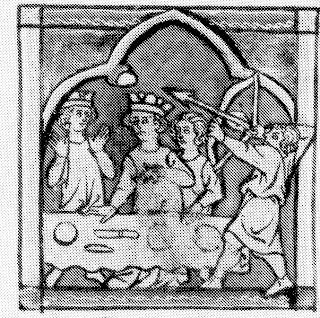 In the underground treasure palace
I went to the Morgan Library & Museum to examine M. 751, particularly a passage on the wicked pope Sylvester II, more often known by his given name, Gerbert of Aurillac. He was a monk, a scholar, a teacher, an inventor, tutor and counselor to kings and emperors, a bishop, and finally a pope. One of his students credited him with introducing knowledge in astral science, geometry, and mathematics that was unknown in Christian Europe at the time. He lived during the second half of the tenth century, and was pope during the turn of the first millennium.

After he died, legends about him began to appear, and were circulated, with various embellishments, for at least the next four centuries. The legends surrounding Gerbert are awesome, depicting him as a medieval Faust who sold his soul to the Devil for the sake of wisdom. M. 751 has a great version of this legend: Gerbert studied in Spain with a philosopher who taught him astronomy, divination, and astrology. There was one book, however, that Gerbert was never allowed to see. So he seduced his teacher's daughter, and with her collusion, got his teacher drunk one night and stole the forbidden book from under his pillow while he slept. To protect himself from his teacher's wrath, Gerbert used the knowledge in the book to summon the Devil, and promised him his soul in exchange for safety from his teacher, power, and forbidden knowledge.

After his pact with the Devil he had a meteoric rise. He tutored the Capetian king Robert the Pious, and the Holy Roman Emperor Otto II. While in Rome on one occasion, he noted a statue in a field outside of Rome. The statue pointed with one hand, and on its head was engraved "Strike Here." Instead of hitting the statue on the head, as other treasure-hunters had done, Gerbert noted where the shadow of the outstretched finger fell at noon. After dark, he came back with a servant and used his necromantic arts from the Devil to gain access to an underground passage. He discovered a subterranean golden palace, with a golden king and queen, golden knights, servants, and courtiers, playing dice and feasting. His servant tried to steal a knife from the banquet table, but a golden archer shot an arrow into the lamp that illuminated the palace. At once all of the figures jumped up and shouted, and Gerbert and his servant narrowly escaped. You can see this moment in the image above. The king and queen raise their hands in alarm as the archer aims his bow and arrow.

I love my job.