Is There A Difference between Animals and Robots? 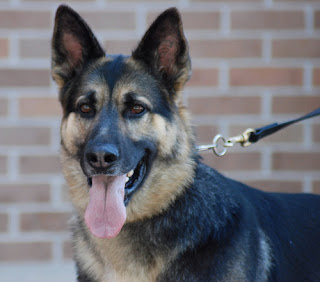 I am a bit behind on my New Yorker issues, but I finally made it through Burkhard Bilger's article [sub. req'd.] about canine police (Feb. 27). Since 9/11, the US military and law enforcement organizations around the country have started relying more heavily on dogs to detect narcotics, explosives, and weapons, as well as to bring suspects (often armed and dangerous) into custody. Most of the dogs are German Shepherds, Belgian Malinois, or Labrador Retrievers, as those breeds are highly obedient, fiercely loyal, athletic, and potentially lethal.

What I found particularly compelling is the way in which these animals are characterized as machines. Bilger first calls them "the weapons" at the outset of the article. Later on, he describes how canine police talk about their dogs' "maintenance" and "superior functionality." At the Canine Detection Research Institute at Auburn University, scientists started out trying to build a robotic dog in the eighties, but discovered that "you can't mimic a dog. It's just a superior mechanical working system." This way of thinking about animal behavior has its roots in Skinner's behavioral psychology, which has made it possible to train (or program) animals to complete previously unthinkable tasks (like the lion who will walk up to its trainer and offer its paw for a shot). By relying on reward-based reinforcement, it's possible to train animals--especially dogs--to have an unvarying set of responses to stimuli.

This characterization recalls St. Thomas Aquinas, who compared machines to animals over seven centuries ago in the Summa Contra Gentiles. A moving statue of an archer (that could shoot an arrow if the mechanism was tripped) is, according to Aquinas, the same as an animal running toward a target: In both cases, the action is accomplished without any kind of free will or choice. He used this example to explain how automata that looked human weren't in fact human. Although he couldn't explain these objects in mechanical terms, he could compare them to a common non-human referent: animals.

And yet I do think animals are capable of affection, feeling, etc. in ways that make them very unlike machines...

Jen, I agree. But the article barely mentions that aspect of animals, except at the very end, when the patrol dog (Danz) is allowed to frolic in the park and play with his tennis ball. Aquinas was not interested in emotion and feeling; he was focused instead on rationality and being able to understand God.

True. It did touch on the idea that some dogs were less preferable because they were almost too machinelike - so is there a point at which one needs some of that sensitivity for things to work? That the dog had to be in tune enough with its handler to be follow directions rather than succumb to its nature. That nuance - hitting that sweet spot - is fascinating to me. But certainly it was underplayed in the article.

Hello, I discovered your blog from this post on James Hannam's blog.

Have you heard of the philosopher and semiotician John Deely? He wrote a book called What Distinguishes Human Understanding no the difference between humans, robots, animals, etc. He also wrote Medieval Philosophy Redefined (2010), which might interest you.