What's in Your Wallet?

The most recent issue of National Geographic has an article on the Staffordshire treasure, a massive Anglo-Saxon treasure-hoard, which was discovered by an amateur treasure hunter in 2009.  Check it out!

The treasure was found near Lichfield, in what was once Mercia, one of the most important kingdoms of the Anglo-Saxon heptarchy. It comprises hundreds of gold and silver artifacts, from roughly 600-800 (although the hoard could have been deposited later), most of which are martial (sword pommels, knife hilts, etc.), and all of which are 100% gorgeous. 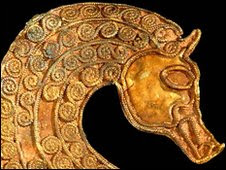 "Scyld's strong son was the glory of Denmark;
his father's warriors were wound round his heart
with golden rings, bound to their prince
by his father's treasure. So young men
build the future, wisely open-handed in peace,
protected in war; so warriors earn
their fame, and wealth is shaped with a sword."
(Beowulf, ll. 19-25)

Where the gold came from is something of a mystery--it might have been recycled from Roman solidii. Likewise, the garnets in the pieces probably came from central or southern Europe, but it's not clear how they ended up as part of an Anglo-Saxon hoard.

Oh, and the guy who discovered the hoard? He was living on government assistance. Not anymore. Time to buy a metal detector.
Posted by E. R. Truitt at 7:27 PM